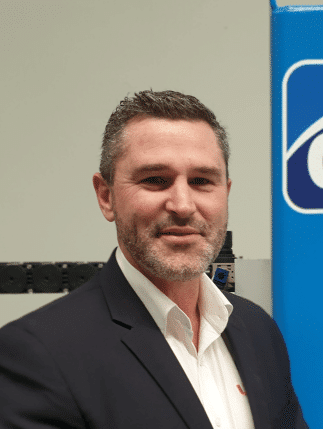 The road from sports star to machinery sales guru is an unusual one. Nonetheless, it happens to be the story of our Glass and Stone rep’s career, which has carved unusual twists and turns, at every stage – starting in the Sydney suburb of (please insert here.)

It was there that Craig kicked his first rugby ball, and immediately fell in love with the sport. From that moment on, he was constantly on the field, surrounded by siblings and mates; learning both the skills and techniques of the game, as well as qualities that would prove invaluable in his professional life, decades on.

“I’m from a big family, I was always in team sports. Sports were a big part of my life. Being part of a team, you have to play as part of the team – especially when you’re the captain.”

And the captain he was – for Australia’s junior representation. It was a role that he revelled in, leaving school at an early age to pursue the road to professional athlete status. Things were looking promising – until horrific injuries stopped him in his tracks. Having poured all efforts and aspirations into the dream job at full force, Craig was devastated.

At the time, pivoting in another direction was unthinkable. Luckily for him, Craig’s rugby coach happened to own a glass factory, and offered him a job. He gladly accepted, and so, took his first step into the manufacturing world.

While injuries prevented the former athlete from lifting heavy things in the workshop, that didn’t mean that he wasn’t getting his hands dirty. learning the trade, Inside the factory the production processes had his attention captured. Igniting a passion that would eventually align perfectly with Innovync’s high-tech machine solutions and quality service.

That spurred him on to earn several trade qualifications, including one in Process Engineering – which has become an integral part of his skill set.

In parallel with the studies, Craig had worked his way up to window sales within his ex-coach’s glass company, and was making tracks; which didn’t go unnoticed by the firm’s aluminium supplier. The sales rep there knew Craig well, and saw something in him. On a routine pickup, he invited the young window seller to meet with a machinery company that was scouting for new salesmen. Craig agreed to go, two weeks later he showed up for work, and began making his mark on the machinery industry

“To be honest, I wasn’t that fond of selling; going through the process to get a customer to put his name on the contract. Not as much as taking a customer’s problem, and finding a solution; getting him more money for the product he was making.”

In his new role, those problems were anything and everything that Australia’s Stone and Glass manufacturers faced with existing machines. Even the minutest change could make a major impact on operations, streamlining factory flow – and helping generate greater revenue for his clients.

“During my time in the machinery world, I took a liking to the details of cost of production and improving efficiencies.”

He soon learned that problem solving in the manufacturing sector was far from one-size-fits all. Unlike observations in process engineering and fabrication efficiency, providing solutions for clients involved taking a different, deeper approach to conventional sales.

“I think it’s important to understand people. Not just in my area; you have to understand a person’s business and how they do things; their professional life – but also understand who they are.”

While circulating around Australia’s factories, the interest in streamlining processes kept tugging at Craig. Instilled with the desire to do good from an early age (by a devoutly Catholic mother), he began to pair insights with a deep dive into the realm of numbers, emerging with practical outcomes, valuable ideas.

“I was watching glass and stone going through the factory in a very inefficient way before I looked at the data and told people look, there’s a better way to do this, and you can make more money doing it.”

By that time, Craig had progressed to being Oceania General Manager of the Glass and Stone division within his former company, leading a team that implemented his unique work, and making an impact. At a certain point, the desire to branch out and progress in other ways stirred within him – but found no outlet at the firm.

“I wanted to start a couple of businesses to run on the side of the stone and glass industry. My former employer wouldn’t allow that, and they wanted a major cut in the profits. Pierre and Steve contacted me around that time, and I took the offer.”

In fact, our founder and his former Unimac partner had heard of our Stone and Glass guru several years earlier, and tested the field. Three years later, they came knocking again, just at the right time. Craig signed a new contract, where he found room for his projects; while the then Unimac happily had a seasoned expert on board. Over time, a synergistic working relationship formed between our founder and the ex-rugby player, which functions seamlessly to this day.

“We’re got a very tight knit team and very personal way of connecting with the customer. Automatically, they say that’s different from connecting to the status quo. If I’m speaking specifically to the customer about service, and you can call the head of the company and get an answer from a guy who’s got a technical background – and that’s a very personal relationship between machine and user – then that’s setting up a completely different interaction that manufacturers appreciate.”

That working relationship has flowed from Unimac to our re-branded Innovync, and is a part of our DNA. Craig’s 30+ years of experience in machinery sales may have seemed unthinhable before he started – but as sport and life taught him, being a team player is key in the field.

You might already have met Craig, in which case, you’ll know that these words match reality. The impact he’s made on our client’s businesses is nothing to sneeze at, and we’re proud to say that Craig Haidley, our Glass and Stone star, is elevating the Australian industry, one machine at a time.